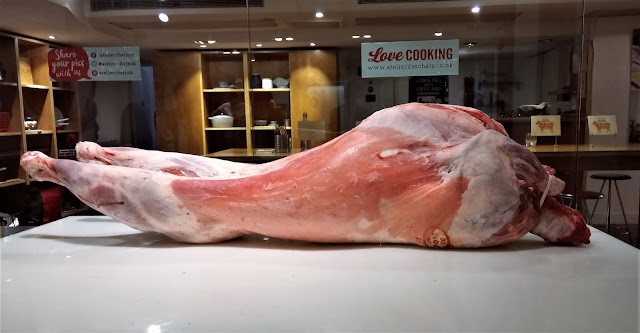 Watching a butcher go about his or her business is always pleasure. As they work on a single carcass, there tends to be an air of seamless calm and furrowed concentration. Bones are counted, invisible lines get traced out and arms often move about in swift arcs and well-worn shapes. Separation of joints are levered by the heft of a downward elbow. Cartilage splits cleanly, with a firm, precise chop. Smaller, quicker incisions are made. And suddenly, a metal tray is abundant with a variety of cuts, all processed within the blink of an eye. Causing you to ask - ‘How did that happen?’ Or even go so far as to utter - ‘How clever is that!’

Yet when sharp knives and saws are involved, there is always a bit of trepidation. All that flashing steel, with glimmering pointy ends dancing about the place can leave you with both fingers and legs crossed. I know of at least one butcher who has stabbed her own leg. Accidents are common. Which is why sometimes butchers dress up as Knights of the Round Table, all sheaved in chain mail and with big bushy moustaches and monocles. Actually, they don’t do that. I am now thinking of Monty Python’s Quest for the Holy Grail, for some reason. But I have got a funny feeling that if I were to suggest to Julien Pursglove, Sainsbury’s very own Master Butcher, to don a similar outfit; he would simply shake his head and say, ‘Silly boy.’ Just like Jim Broadbent might do. Because Julien reminds me of him in some way. And I am sorry for that observation, Julien. I can’t help myself sometimes. I have a terrible tendency to ponder, in a filmic sort of way. 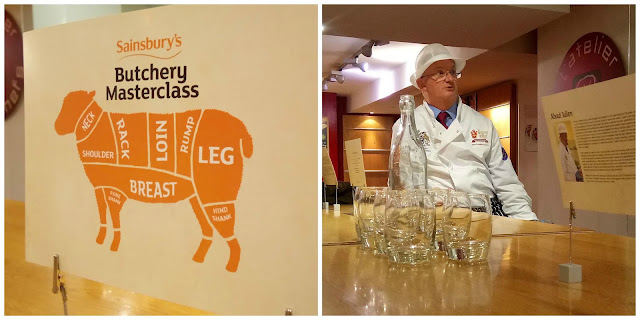 Still, after watching him at work, you can understand why Sainsburys brought him on board. With over 38 years’ experience under his belt. I bet it’s been a long, long time since Julien has had any sort of incident. I would imagine that to become a Master Butcher (and one of just 29 across the globe) having kept all your fingers is a minimum requirement. In fact, to qualify for the award, Julien had to demonstrate to the Meat Training Council’s moderators that he had sufficient and skills, ranging from understanding livestock production, carcass dressing, butcher, food safety and dealing with customers in a retail environment. As such, Julien is the only Master Butcher to work for a major retailer.

For the demonstration, which was held at L'atelier des Chefs just off Oxford Street a couple of weeks ago, Julien showed our small audience simply how to break down a lamb. I say simply. It wasn’t simple at all but having first dissected the animal into three - the forequarters, the saddle and the hind – the speed at which he then went on dress three of the aforementioned metal trays was astonishing. Shoulder, neck and fore shanks were displayed for slow-cooking. Steaks, cutlets and chops were coaxed for mid-week inspiration. Legs were butterflied for BBQ and best-end racks were trimmed and polished for those special occasions. Revealing a connection from animal to supermarket shelf, or a bounty, that is sometimes forgotten about.

After that, it was time for the audience to have a go and steady their own hand at preparing a rack of lamb from a loin. With sexy French trimming, the lot. Ooh la la.

Interestingly, at this point, Julien insisted that we all wear chainmail gloves, as he had done during his demo. Which I sort of sniffed at first. Bravado can get the better of me sometimes. But I am glad he insisted. By way of suggesting that if I didn’t wear one, I would be thrown out of the class. 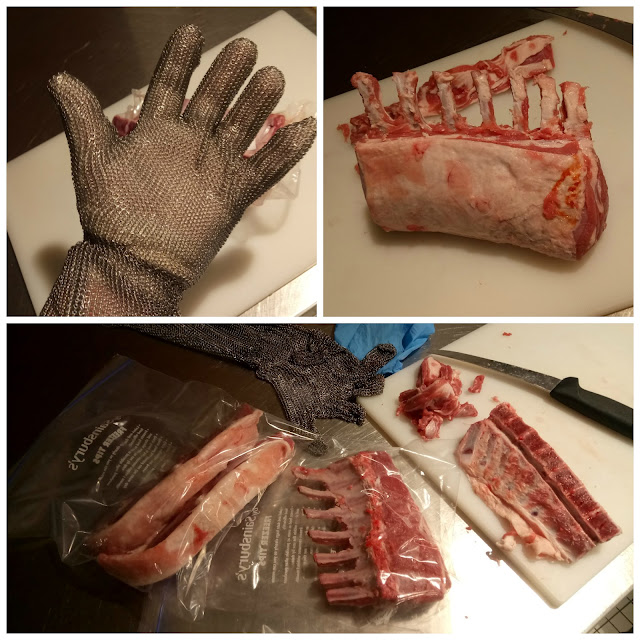 Of course, nothing is ever as easy as it seems or looks and just trying to saw across the cross section of the loin and split the rib bones away from the chine was frustrating enough. I do know that butchers are sticklers against splinters and when Julien wandered over for a look, I desperately started padding away at my rack with some blue paper.

‘You’re nearly there,’ he cooed. And then with one last sweep of the saw, it was done. ‘Good work!’ he said.

‘Cheers Julien,’ I replied, feeling like some sort of proud apprentice, or meaty Padawan.

I would have said - ‘Yes, Master.’ All solemn like. But I don’t think he would have made the Star Wars connection.

Finishing up, we then tucked into some of Sainbury’s new range selection. Some slow cooked lamb shoulder, marinated with rosemary and smoke garlic, cutlets dressed in lemon and herbs and some leg steak, lightly seasoned, to show off their quality. 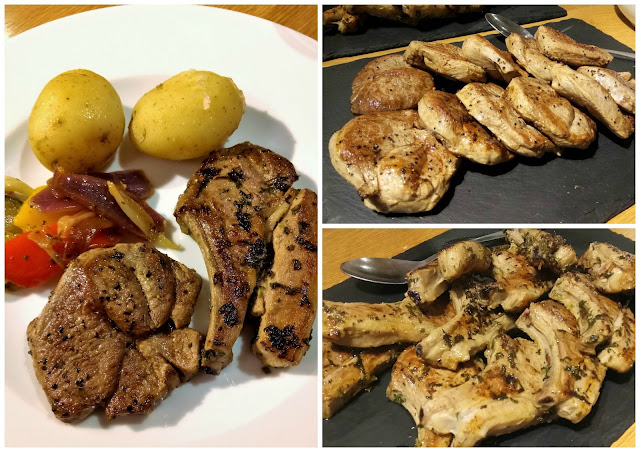 Sitting with Julien afterwards and having a further chat, it was great to get the further lowdown and a sense of pride that he instills in his work and the industry. Working closely with the suppliers he meets, provenance, sourcing, maturation and butchery specifications are high on the agenda. Which in turn reflects on Sainsburys. For perhaps too long, that element has been missing from a lot of supermarkets. With Julien and his vast knowledge, it is good to know that they have a solid figurehead on board, to help educate consumers and provide assurance.

It was also thrilling to hear that he had supped a pint or two at The Hand and Shears a few times. Or ‘The Hand and Hell’ as he called it. This is a pub just around the corner from the Butcher’s Guild Hall in Barbican, by the way. And very close to where I used to work.

‘Oh, I’ve seen loads of butchers in there before,’ I told him.

‘Yeah, well I don’t go in there so much these days. But I tell you what, it’s funny the number of actors I’ve seen in there in my time.’

‘Oh, people like Jim Broadbent, John Cleese, you know. Apparently, Alec Guinness used to frequent it too. Back in the 70’s’

‘Nah, not really. Although I would like some more of that shoulder. Past it down, will you?’ he said, with a veritable wink.

What a legend, eh. Someone should make a movie about him really.

Tell you what, I’ll be the director, you bring the clapper board and we’ll have lamb cutlets for lunch.