Crispy Duck on a Giant Crumpet 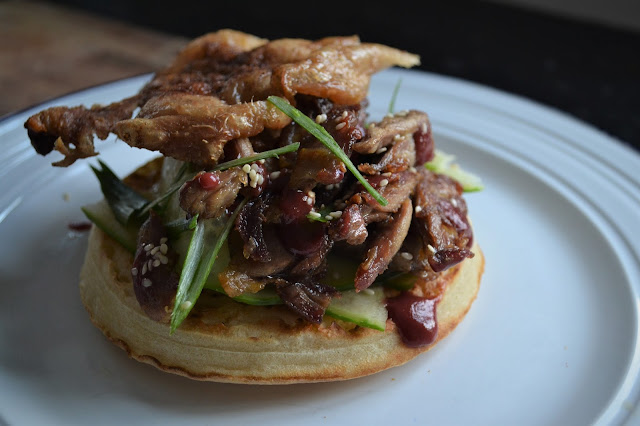 I know what you are probably thinking right now.

'Oh look. He's gone and taken a stalwart item from the Chinese takeaway menu. And instead of sticking it in a pancake, he has only gone and stuck it on a bloody giant crumpet. Well done him.'

As far as interpretations go, you'd be right. For some time now, I have been wracking my brains as to how I can utilise the humble crumpet, beyond the realms of simply slathering inch thick butter over the top; followed by a handsome dollop of strawberry jam. Or even a thin scraping of Marmite. Two perfect ways to eat crumpets for sure, especially in the morning with all that finger-licking glory.

That was a little ditty by the way, that I like to sing to myself first thing.

But lets get back to the question in hand. Went it comes to crumpets, surely there must be more you can do with them? Should crumpets only serve as vessels for melted yellow fat and to be topped sweet or savoury condiments? Are crumpets just glorified toast?

No. Nay. There must be more to life than this. As Bjork once said.

So, hence my dicking around in the kitchen for the best part of an afternoon, making up plum sauce off the cuff, roasting duck legs, then carefully peeling duck skin off and crisping up skin in the oven.

This really was a labour of love and once I assembled the lot and stood back to admire, I have to say, it sort of felt revolutionary for a second.

Then a small voice whispered in my ear and said 'Dan, you've just spent an hour making up a whole load of shizz to put on top of a crumpet.'

Which was slightly deflating. But then I tried it and reader, this really is not such a bad thing to do at all. Given that regular Chinese pancakes have that flat, dusty, Communion bread vibe; using a thicker and fluffier base to sit your succulent duck and crunchy veg upon is fairly transformative. I think drizzling some duck fat into those holes was the main trick and working as a witty starter, this would go down a storm at a dinner party.

'Man, I never knew you could use crumpets like that! You are a genius!' is surely the sort of statement you can expect from such endeavor.

But as I have only tested these on myself and Mrs FU, I cannot be 100% certain. I also need to work out how to incorporate crumpets proper into a recipe and I do have some burgeoning ideas.

I just to need to nick a boat and sneak off to some island, rush back to the town's best baker.

There's got to be more to crumpets than this. 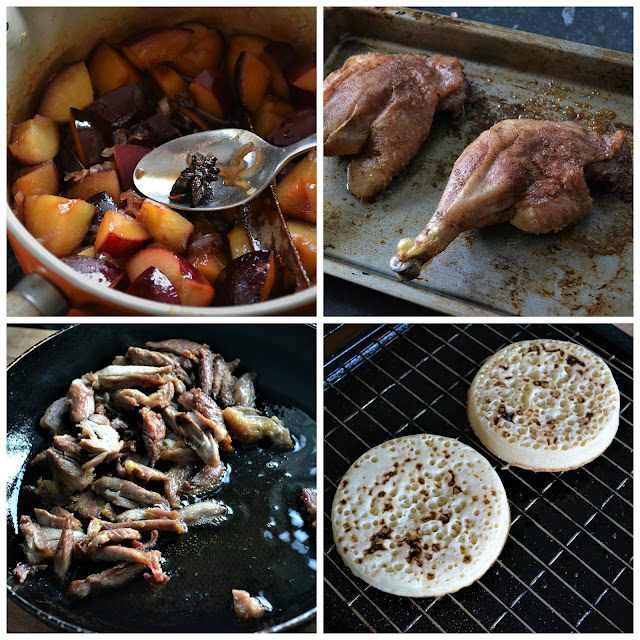 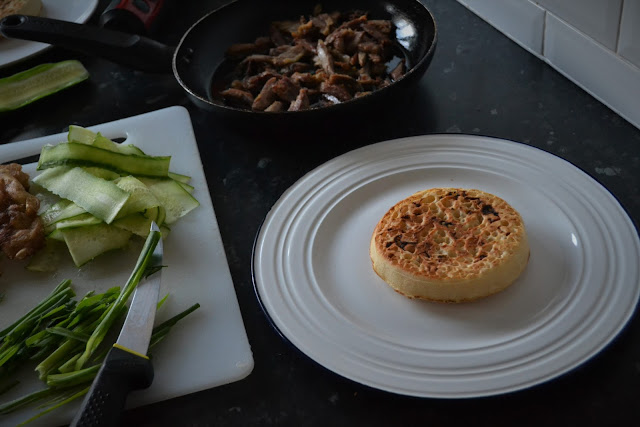 Heat your oven to 190°C and place your duck legs on a tray and lightly dust all over with the Chinese five spice.

Place the duck legs into the oven and roast for an hour and then take out and leave to cool a touch. Then carefully slice off the skin (start from inside the leg working out) and place the skin back into the oven for another 10 mins to crisp up some more. Take back out and drain on skin on kitchen towel.

Whilst the duck is cooking make the plum sauce by placing a saucepan over a medium heat and add a splash of oil. Add the shallots and stir and then cover. Once the shallot is softened, add the plums and cook down for another five minutes, before adding the rest of the ingredients. Reduce to a gentle simmer and leave to bubble away for 20 minutes. If the mixture begins to look too dry and sticky, add a splash of water.

When ready, fish out the star anise seeds and the cinnamon stick and blitz with a hand blender. Pass back through a sieve to remove lumps and keep warm in another saucepan. (I'd say this gives you about 150ml of sauce).

Once the duck legs have cooled some more, slice the meat off the bone and roughly shred and then place into a frying pan over a high heat, to crisp up once again.

Next toast your giant crumpets until they begin to turn golden, flipping over to toast the other side.

To begin assembly, place a crumpet in the centre of your plate and spoon some of the excess duck fat from the frying pan all over the crumpet and into the holes.

Add a few thin slices of cucumber and then pile up some of the duck meat, interspersing some of the shredded green spring onion along the way.

Once piled up, drizzle some plum sauce all over and add a sprinkling of sesame seeds. Finish by topping with the crisp duck skin. 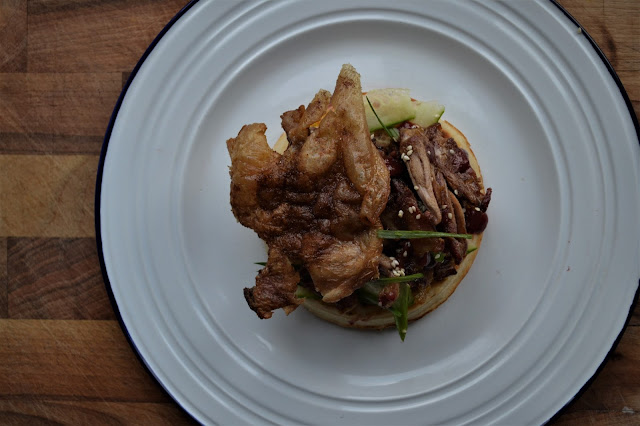 Marysia said…
Hi and Happy New Year.
Love the look of this and will definitely try it out.
I regularly have crumpets (Warburtons are the best store bought choice) but like to make my own, when I have time.

I think your recipe would be even better with your own home made crumpets. Fun for children to help with, popping the bubbles.

So glad I have found your blog. Follow you on GBC.