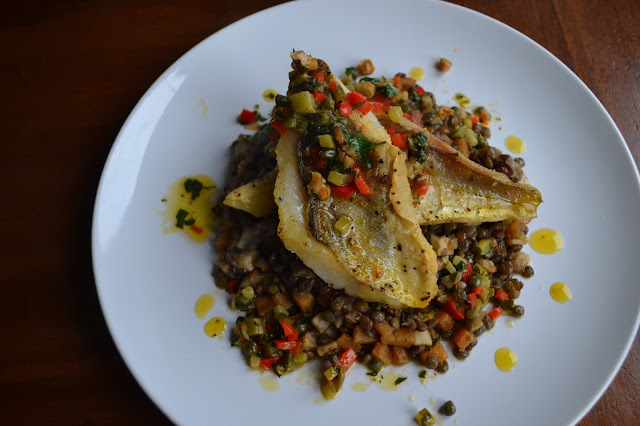 Warning – this is a recipe of two halves. One half involving the slightly laborious affair of peeling, dicing, stirring and slowly braising. Whereas the other half is a bit more urgent, frenetic and fast paced. A collision of cooking styles then. But when put together, I would say that both halves really do make a perfect marriage. Producing a plate of food that is vibrant, seasonal and packed with vitamins. He says, in his most humble of opinions.

As always, stories should always accompany a decent recipe and this one begins with fish or the dilemma of what to do when you can’t find one. By that, I don’t mean nonchalantly wandering around the living room, lifting cushions and uttering – ‘Now, where did I put that fish?’ No, I am talking about letting go of assumptions and familiarity when it comes to buying fish and stepping out into the unknown.

The case in point comes from a visit to a local fishmonger some time ago, when I walked in with cod on my mind. Because I wanted to have a crack at Rick Stein’s grilled cod on pommes sarladais with truffle oil; as featured in his cookbook - ‘French Odyssey’.

From memory, our conversation sort of went like this:

‘Good morning. I am looking for some unskinned cod fillet please. Just under a kilo.’

‘I am sorry sir, we are all out of cod. But we do have some whiting in.’

‘Well, whiting isn’t a bad substitute sir. Just as firm and fleshy, and with a good amount of flavour.’

‘Whiting will do the trick, sir. I promise you.’

My responses were all delivered with a slide into unwavering doubt and fear by the way. However, there was something about my fishmongers’ twinkly eyes that suddenly made me trust him and go for it.

‘OK then. I will take some of your finest whiting, my good man. And whilst you are at it, make it two kilos!’

I also had to bolster some confidence back into the situation because a queue had formed behind me, full of loud tuts and murmurs of violent dissent. You really don’t want to mess with the old ladies of ‘Ornchurch.

But what of my grilled Whiting on pommes sarladais and truffle oil then? It was great, delicious even and furthermore, I had tried something different.

This notion of trying something new is also behind the ethos of a new fresh fish range at Sainsburys, named (quite aptly) ‘Fishmonger’s Choice’. By way of encouraging customers to escape the Big Five -Cod, Haddock, Salmon, Tuna & Prawns – the supermarket is now placing on their shelves some of the lesser known species of British fish. Seasonal varieties, all wild-caught off the south west coast, all excitingly when they’re at their best and most abundant. Fish such as Monkfish, Dover Sole and of course, Whiting. 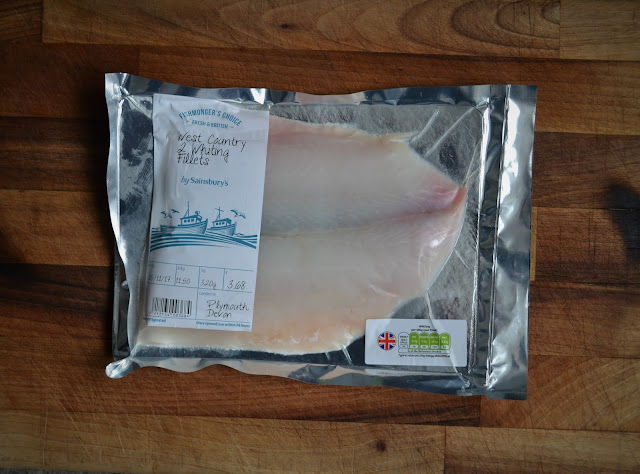 These fish will be available until January, after which, as the weather changes, species such Hake and Ling will be coming into the stores. But in the meantime, I would certainly recommend you try a few Whiting fillets, especially as they are slightly cheaper than cod. After lightly dusting with seasoned flour and flashing in a pan, you’d hardly know the difference. And then served on top of some earthy lentils, with a piquant dressing? Ooh, suits you sir.

Which brings us back to the recipe and nods towards perhaps a second story. But I will keep the next part quick.

For this treatment of lentils is the longest, most boring job I have ever given myself in the kitchen. In an effort to get some more pulses into my children’s lives, I have discovered that a base of sweet and softened root vegetables, or soffrito, is the best way to get them to chow down on these protein rich little jewels. And as a result, they LOVE lentils. It does often mean an hour or so of mirepoix though. A nimble chopping down of carrot, onion, celery, swede, celeriac and sometimes, the tip of a finger or two.

But these are the things you do, to overcome the ‘fear factor’ when it comes to food.

Thank goodness then, that the whiting gets cooked so quick.

For the fish
4 Whiting fillets, each one cut in two
50gms plain flour
Salt and pepper, to season.
50ml rapeseed oil

First, place a wide pan over a medium heat on the hob and add a generous glug of oil. Once the oil has warmed up add the onion, celery, swede and celeriac and stir to combine. Bring the heat down and leave to sizzle for about 20 minutes, stirring often. 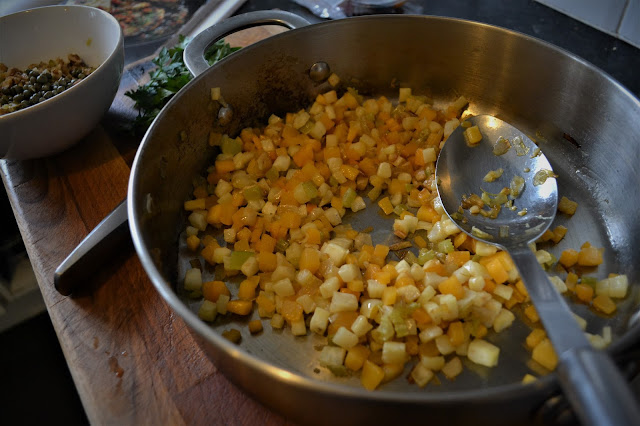 Next add the garlic and the herbs and continue to gentle fry for another 5 minutes.

Whist the soffrito is cooking off, place your lentil into a saucepan and cover with the same amount of water. Bring to the boil and then reduce to a simmer, cooking for 20 minutes until they are soft but still with a bit of give.

Once ready, combine the lentils with the soffrito, sesame oil, soy and vinegar and mix together. Keep warm.

To cook the whiting, season the flour generously using a bowl or a plate and the lightly dust the fillets. Place a large frying pan over a medium to high heat and add the oil. When hot, add the whiting skin side down and fry for two minutes, before flipping and frying the other side for just a minute. 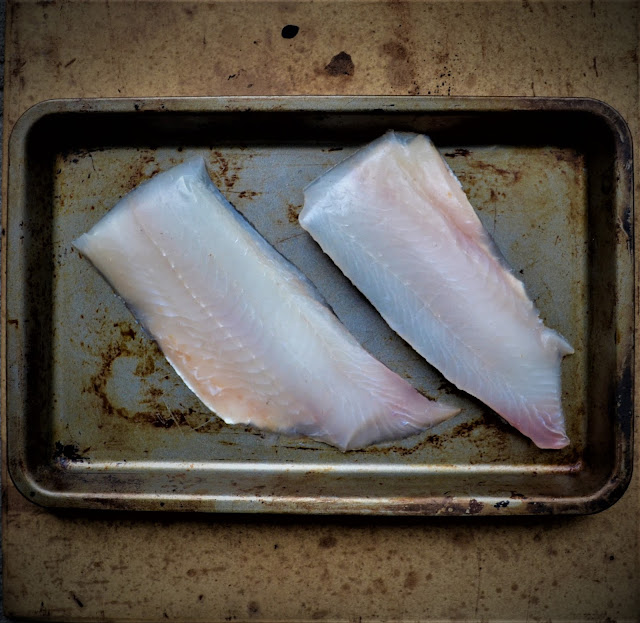 Drain on kitchen towel and keep warm. (Also, you may need to do this in batches).

Finish by throwing these salsa ingredients into the same frying pan – gherkins, peppers, capers and walnuts - and cook everything through for about two minutes. You might need to add a splash more oil. Finish by adding the lemon juice (add a little at a time, to taste) and then the chopped parsley.

Plate up by spooning a good portion of the lentils in the centre and place two pieces of whiting on top. Then drizzle over a nice amount of the winter salsa all over the fish and the lentils. 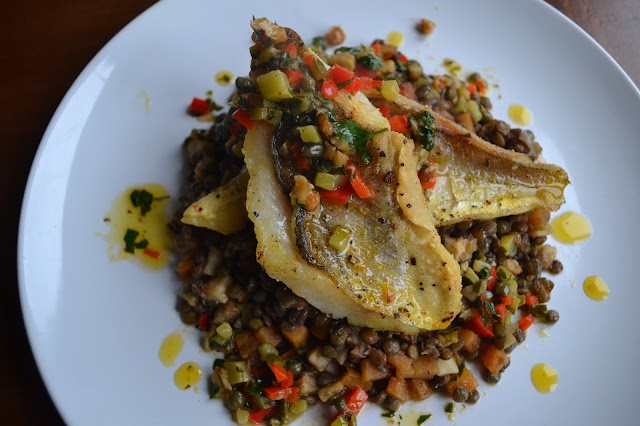