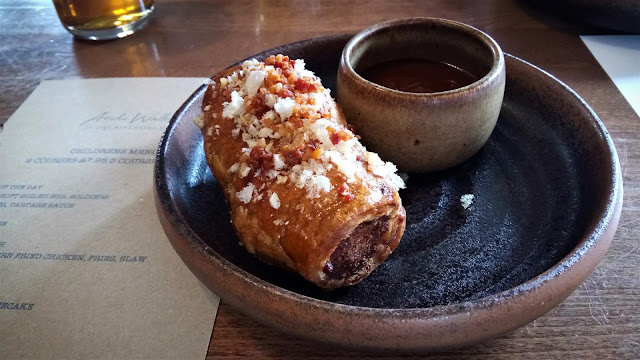 Before I continue with this review, I think I should reveal that I have a soft spot for Andi Walker. Having met plenty of chefs now, I can safely say that he is definitely one of the nice guys. Modest and humble, he simply wants to do the best he can and create honest, hearty and fulfilling grub. That said, Andi also has the minerals, so to speak, to produce some rather stunning and exceptional plates of food.

Last year, prior to his eventual takeover of the Riverside Inn in Chelmsford, I visited the pop-up that Andi was running upstairs. The tasting menu he conjured up was brilliant. Dabbles of joy turned up in the form of salt baked celeriac with burnt apple, mustard and hazelnuts. A beautiful piece of guinea fowl breast, dusted with pancetta, paired up with textures of onion and a croquette containing soft, rich, ribboned thigh was exceptional. And his clementine sorbet, with vanilla ice cream and white chocolate snow rounded off proceedings perfectly. It was a great night and I even managed to wrestle a small jar of Andi's Marmite butter from him, such was his generosity.

Couple that with the fact that Andi is obviously a proud Dad, hardworking and just recently, has been organising soup and sandwich runs out to the homeless in Chelmsford, due to the snow that we've been having; well, you can see why I think that he is such a good egg.

OR SO I USED TO THINK!

Yes, you saw this coming, didn't you. Because despite all the praise I have just bestowed upon him, the man stitched me right up recently. I went to his launch party back in January. You know, to show some love and support and the place was swinging. Monkfish goujons and butternut squash bhaji's were flying out the kitchen and prosecco was poured over the bar with gay abandon. And though he was busy, Andi even made time to come up to me, to see if I had been enjoying everything so far. In particular, he wanted to know what I thought of the Essex Sausage Roll.

With mouth full, I could barely reply but it sort of went - 'Grepht mate! Bit's all bloody greatffh! You shoub enter next beers Grut Bausage Boll Off!'

To which he laughed, and then replied:

'Hey, have you met Dean? You should say hello. Hey Dean! This is Danny! You remember the guy who wrote all that crap about us on Great British Chefs, when we were on MasterChef? This is him!'

And off he went. Leaving me with Dean Westcar, who looked me up and down and then said - 'Oh yeah, I remember you.'

With the eyes of a cool killer.

That's tough you know. That is quite hard to get through. Facing up to someone that you may or may not have rubbished online. Especially when you can't really remember what you said. I think I may have stood there silent, wide-eyed, with an inane grin and half a sausage roll hanging out of my mouth for at least a minute.

Thankfully, Dean broke the ice by commenting on the aforementioned sausage roll and how good it was. Then we ended up having a chat about Masterchef and what he was up to at Lucknam Park and soon all was well. I then made my excuses and ran straight to the toilet and locked myself in there to Google and find out what the hell I had written. It wasn't that bad.

I am sure seasoned food writers and restaurant critics, endure this all the time and it is of no surprise to me, that Giles Coren was plastering his sliced spam all over social media last week. I am sure that someone has clocked him, finally. But that night did serve a reminder that one must live and stand by their words and be prepared to jump through a window, or leap into a passing car, should anything like that happen again.

I didn't stay angry at Andi for long by the way. I think I may have even hugged him on the way out -free prosecco, see - promising to return with my children in tow. Which we did during the half-term break, to take advantage of their offer that 'kids eat free'.

Coming back to The Riverside Inn itself for a second then, the pub, originally owned by Youngs, has been taken over by the Blue Group. So there is now a degree of plushness, glamour and bling about the place, such is their signature style. But thankfully, there are still a few rough edges (not forgetting low ceilings) and the pub's sense of history - it used to be a watermill in the 17th Century - remains intact. The bar area itself is perhaps a little bit cramped for a Friday night session but seeing as Andi and co are moving The Riverside into gastropub and fine dining territory, that probably doesn't matter so much. Parking is a slight snag but once the neighbouring ice rink and sports centre is finished, things should ease up. In fact, summers outside at The Riverside Inn, with the arrival of a Josper grill in the beer garden should turn this place into quite the destination.

All bolstered, of course, by Andi's menus. If Andi and his team keeps ploughing on, like they did with our lunch a couple of weeks ago, then all will be well. 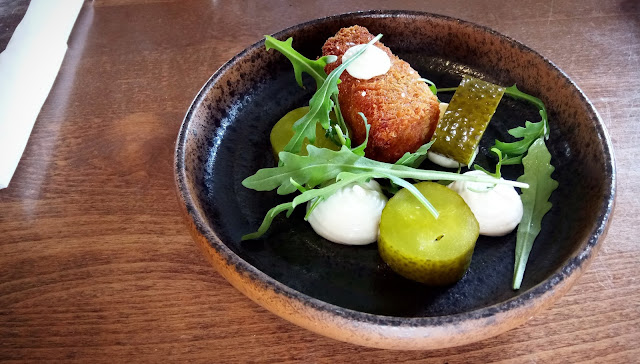 Despite quietly telling myself to work a solid line of vegetables into my lunch, I was quickly undone by the mention of ham hock, with mustard mayonnaise and gherkins. I love a wally and as always, it proved to be a great foil to the shredded pork, all unctuous and sweet. Some mustard seed had also been folded into the porcine mix and they are so great when braised, ready for teeth to pop little bursts of soft heat onto the palate. A more than decent stray then, from regular terrine and pickled Branston. 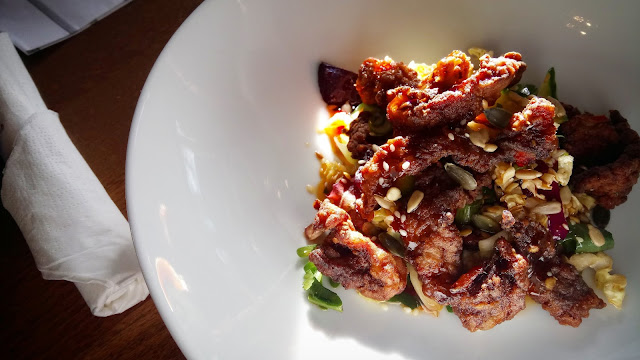 Mrs FU, also had her meaty spectacles on and went for the crispy chilli beef salad. Which again is fairly commonplace these days as a starter, but it can err on the chewy side. You wonder how long it has been left coagulating in the fridge sometimes. But this was obviously cooked to order and seared fiercely, to provide that texture and to keep a good strong flavour of cow. Blended with honey, seasame and soy, the bowl also delivered plenty of fresh hits. I got one tiny piece to eat. 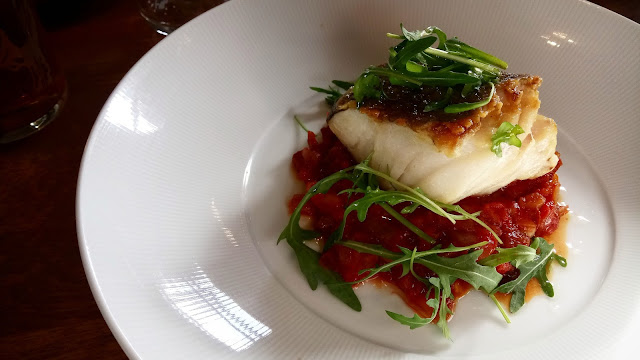 For mains, I decided on fish, quite triumphantly. In fact, I said - 'Gang, I am forgoing any more pork today and I am going to have the roasted cod.' And my son promptly fainted. With a crackling yet pliable skin on top and quivering flakes underneath, the fillet had been cooked very well indeed. The accompanying tomato, bean and chorizo stew did lack a little bit of zing. Personally I would have liked some more chilli heat but overall it worked well and encouraged plenty of finger swiping afterwards. 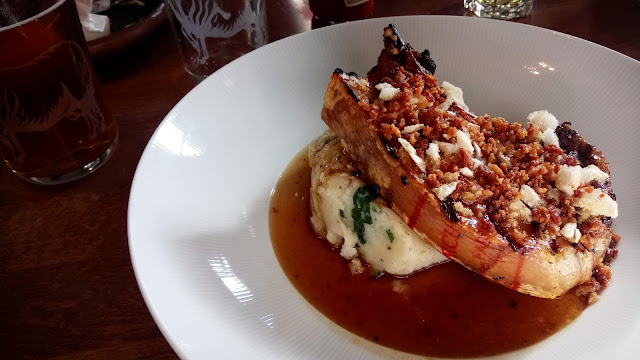 By contrast, Mrs FU carried on falling head first into the world of pork. A fair whack of a chop that had been sourced by Essex favourite, Great Garnetts, sprinkled with some bacon and perched on some very good colcannon. The skill is in the cooking but I am sure chef will back up the importance of sourcing quality meat here and the flavour and consistency of this chop spoke volumes. The accompanying gravy also scored high marks and more moping with digits. 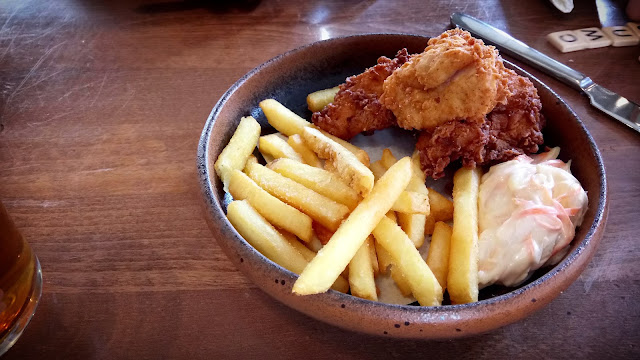 Not forgetting da' kids, for they are mini-critics too, they both plumped for the Southern Fried Chicken, with 'slaw and fries. Having visited their first KFC back in December, I was a bit nervous, as they both walked away battle scarred and terribly greasy and made me vow that I never to take them there again (fair play to them, the one we visited was a sh*t hole). So it was gratifying to see them give Andi's version the big thumbs up. Because you can't beat fried chicken really. Finlay could have probably eaten twice as much. But he is going to be 6'6 when he grows up. 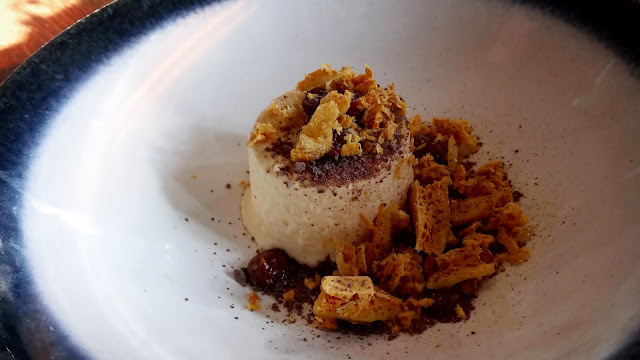 By this point, both Mrs FU and I were stuffed, so we decided to share a dessert and then immediately regretted the idea of sharing a dessert when it turned up. A honey parfait with bitter caramel, honeycomb and chocolate delice, it was far too delicious and small for two to share. And perhaps if the children hadn't been there, a bitter slanging match would have erupted. So take my advice. Do not share this dessert. Treat yourself and have one all to yourself. Have two even. Four! Seriously. Do it!

With the addition of drinks, our bill came to a very reasonable £65, excluding tips, which is not bad at all. Even if The Riverside had not been running that special offer, it still would have been great value - the kids menus start from £7.95. We have sat in a couple of chains over the school holidays before and often the premise of the children's menu is to offer something of the guise of being cheap and cheerful but all it essentially amounts to is bread, bread and bread. It was also helpful that Andi also threw a couple of those wonderful sausage rolls our way, gratis, but a return is on the cards and soon. Sunday lunch in particular, is meant to be worth the journey.

Great stuff then, from a man who is essentially a lovely soul. Though he will drop you right in it, from time to time.

But then again, most chefs do that, don't they? 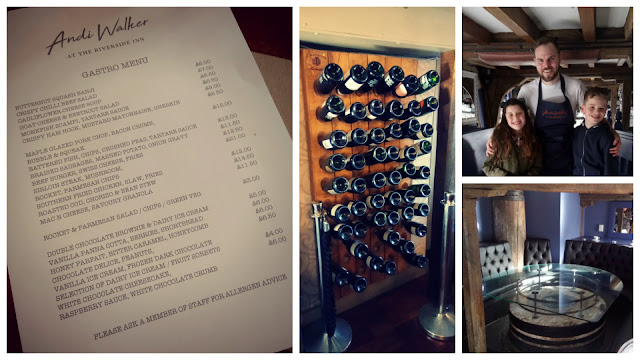 Daniel said…
Awesome,nicely written piece as ever. I need to visit and eat four desserts
5 March 2018 at 11:09