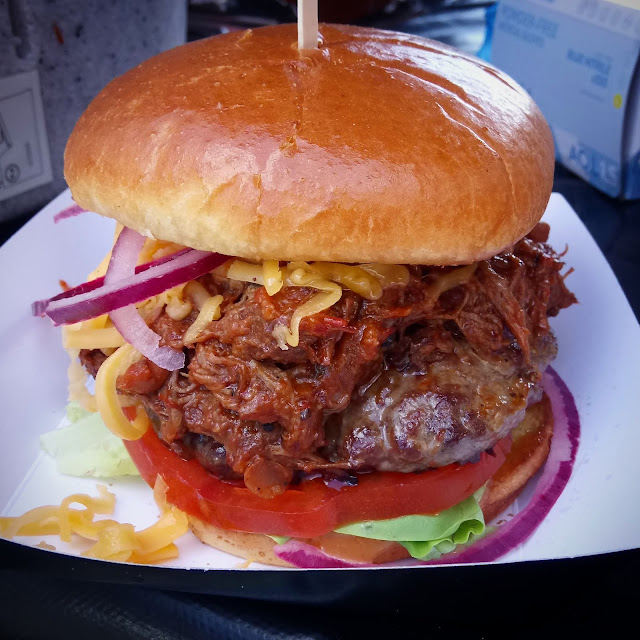 This really is just a quick one, to turn heads onto a little street food outfit I stumbled across last week. Picture the scene, insofar that I am walking down Hoxton Street and currently replaying the Verve's Bittersweet Symphony in my head and on my headphones. It's a sort of a given that whenever you stroll through this particular thoroughfare, you have to adapt the loose limbed and slightly aggressive pace that Richard Ashcroft adopts in the video. Zoning out, you just have to stare ahead, maniacally. Like you're fooking mad fer it and slightly mad too. It helps if you have the leather jacket, high cheekbones and soft padded Hush Puppies. But if you don't, no matter. On that particular day, I was dressed in a floral t-shirt, flip flops and jean shorts - jorts or sheans? - and made sure that I shoulder bumped past at least three people. Without even saying sorry or anything.

The music was echoing as I did so, those triumphant strings building up through to the chorus and refrain, as I whispered under my breath:

What's this Cowabunga? OK, it was the name that caught me first but when I saw the words 'Dairy Cow Beef' - that's what really stopped me in my tracks.

Of course, there are burger vans and stalls aplenty in this big city of ours and ordinarily, I might have just marched on by, channeling Richard. However, just on those three words alone, my interest was piqued. The smell of sweet meat sizzling away also played a part.

I asked the guy behind the counter, who's name is Scott by the way, if he was cooking with Galician meat and he replied 'No mate, this is British. Well, I get it from Yorkshire.' Again, I had heard of some restaurants starting to use beef from retired UK dairy cattle on their menus but to see a street-food stall using it, sounded fairly implausible. If not slightly dodgy. Given the state of some those aforementioned burger merchants

Scott went on to explain - 'I use brisket mostly, with a few other secret cuts and ingredients. But the main point for me using it, is that it is an ethical source of meat. Dairy cows in the past would simply get culled and wasted. But with a bit of extra care and attention, they can be kept on grass, live a bit longer and as a result, you get a lot more flavour.'

After that I was sold and decided to go for a 'Dirty Cow' - buoyed by the addition of burnt end brisket chilli and pickled red onions.

'You'll need napkins,' Scott grinned and he wasn't wrong. He wasn't wrong about the taste either. The burger could have been hidden under the morass that was piled on top but it stood out quite quickly. Intense, juicy and almost gamey, it certainly packed a punch and I would say that for some, though it might take getting some used to.

Personally, I thought it was very good though. Extremely good. Too good. Especially the sloppy chilli.

So good that I was very tempted to order another one. That would have put my Richard game right off though. Wandering off up Hoxton Street. Wobbling from side to side. So I didn't.

Hailing from Essex (and hence my extra interest) Cowabunga have only been trading for a couple of months but have plans to pop up here and there across East London and God's Own County. Keep an eye out for them via their Instagram page here.

I am just wondering when they're going to roll out the pizza oven. And if you don't get that, you never grew up watching children's TV in the 80's. Which is a shame. 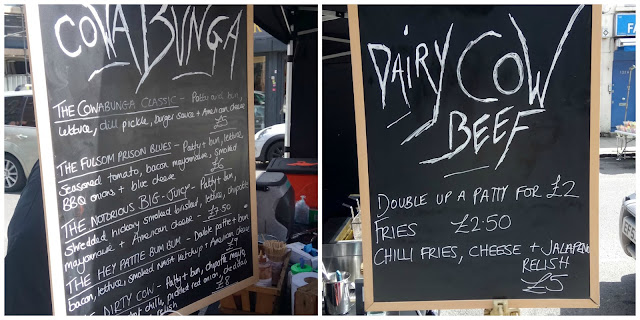