All change: Vol One 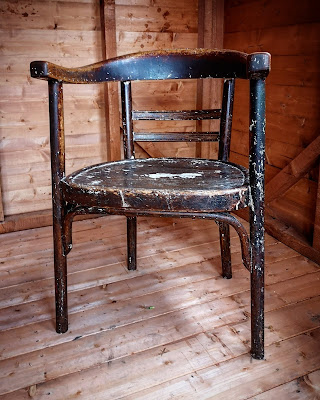 Today was January 6th. Which of course meant that we all had to put our Christmas decorations away, for fear of breaking the 12th day deadline. Penalties are fierce for those who don't pack away their decorations, baubles and fake plastic trees, tightly back under the stairs. It is all noted, you know. Until your kids are old enough to not notice anymore. But of course, we all had to put our houses back into order anyway. To get ready for the New Year ahead, and schools, and for life in general.

So, like lots of other people, I fairly spun around the place today. Visiting the shops, for supplies - mostly vegetables. The rubbish dump, for intensive glass bottle dispensing. And the shed at the bottom of the garden, for moving stuff from one place to another. In the vain hope that I may forget about all this stuff and shift it to the back of my mind.

However, the very same stuff will no doubt come back to haunt me at some point in the future.

Probably around this time next year.

Whilst shifting this stuff around, a piece of furniture in the corner of the shed sort of started calling out to me. A chair that once housed the posterior of a rather lovely lady called Nan FU. Who sadly, is not here anymore,

She passed away on November 13th, 2018, aged 85. And ever since she popped off, out into the unknown, I've been meaning to write about her. The chair served as a reminder and that Food Urchin has been barren for some time now. But for the best part of last year, I really did try to keep things to the bare minimum. In order to keep functioning, in some way - and to keep floating, whilst paddling furiously and desperately underneath.

It is a good time to start again though and given the wealth of writable material that my Nan produced and delivered during her time on this Earth, I thought reigniting this blog with a tribute to her would be a nice start.

But then I thought that would take too long. Besides, my Uncle Lawrence summed up her life story rather succinctly - and hilariously - at her funeral. You can read here to get a flavour of what she was really about.

So I am going to talk briefly about her approach to food and the influence it had on me.

To do this, I think we have to go backwards. To go from the end to the beginning. Because at the end, she was really quite a rubbish cook. Don't get me wrong. Nan loved talking about food, about recipes, techniques she read about, things she had seen on TV. But if you walked into her kitchen in the latter stages of her life; as a patron, chef or health and safety officer, you would have taped up the place and labelled it 'Condemned.'

Her fridge harboured unique cultures, undiscovered. Her diet consisted of yum yums, cake (or 'cack' as she called it) and coffee. And the cat ruled over leftovers, crumbs and other matter discarded without whim. Should there ever be a sliver of ham, left dangling on the side of a teacup - Laptop would fight you to the death for it.

Despite this, like I said, Nan did keep up a keen knowledge going of what was going on in the world of food.

'What does pulled pork taste like?' 'Who is this Sue Vide?' And 'I bought some Matcha the other day, but I didn't think much of it!'

The best trick she ever pulled on me, on a visit, was to hand over some frozen hake loins, purchased from a well-known frozen food supermarket.

'What did you think of them?' she asked me, a week or so later.

'They were a bit woolly to be honest, Nan.'

'Yeah, right load of shit. That's why I gave them to you.'

Moving swiftly on though, to a sort of middle ground in Nan's cooking life. When her kitchen was marginally tidier and the ingredients were fresher, she always managed to pull a trick off. Especially when the visits were unexpected.

'Oh hello! It's lovely to see you but I've hardly got anything in! Well look, shit, I will see what I can rustle up. Come in, come in.'

There would then be a rummage at the fridge, a shuffle at the cupboard and before you knew it, thick, door stop sandwiches would be slapped down. Chutney was spooned out, with blue cheese, goats cheese and Manchego. Exotic fruit, such as mango and guava would appear, along with huge grapes from Greece, and Nan would start to ask what sort of tea you'd like - 'Earl Grey or Lapsang Souchong?'

Roasts could be occasionally on the agenda too, as well as stews and curries. But eating and drinking out was often part of the experience too. Afternoon tea at Claridges. Sniffs of port at Covent Garden. Local restaurants in Kilburn, Notting Hill and St John's Wood. Sometimes the result of booked birthdays and family celebrations. Sometimes just accidental meanderings through doors.

I have to admit though, my favourite 'food' time with Nan echoes from when I was a young boy and used to have regular sleepovers. We'd pop out quite regularly and early on a bus to Portobello Road or Camden and whilst I'd say that things were a lot grimier then, they were also vibrant too. I always felt quite joyous striding down those markets, full of noise and clatter. Nan, in general, would be on the hunt for 'toot' as we'd describe it. Dusty trinkets and pieces of pottery, that had no real use anymore but still, they looked pretty. Pieces of cloth would be on the agenda too and I will never, ever forget her fighting with another lady, of a similar stamp, over a piece of decorative linen.

On the way home, we would pick up some bits and pieces and swing by Ernie's, who was a greengrocer at the end of her road. Ernie was the type of man who was born in his sixties and he never ever changed. Bald and with a grey overcoat, he had a friendly face, fingerless gloves and dirty nails and whenever we visited, Ernie would always let me grab an apple or banana for free.

We'd then head back into Nan's clamorous council house and I would sit down at the table, eating the fruit, whilst she got on with the business of breakfast - we didn't use the word brunch.

Her whole frame would occupy the space in front of the oven and I always remember watching her back, as she sort of shuffled around for ten minutes or so, grabbing bits and pieces from a plastic carrier bag.

Then she would turn and present the best fry up ever. Streaky bacon, just erring towards rigidness. A bright round egg, with gleaming yolk. Some browned button mushrooms, always sliced into quarters. And a tomato, halved, grilled and dotted with pepper. A mug of tea would arrive shortly afterwards. Along with a slice of bread, with inch thick butter.

Those breakfasts she made were the absolute best and after wolfing them down - the best part was always the mopping up with the bread - I'd lean back into my chair and stare upwards and contentedly watch specks of dust float in the air, as the sun shone through her window. Nan would sit there beside, in that chair of hers, with a cup of tea and she'd be watching me.

That was something she was very good at you know - watching over me. As I grew up, those gaps in time did begin to appear. What with family, work and all that general bustle, life often sadly presents a broadening distance when it comes to relatives. In recent years, I regularly found myself feeling guilty on a Sunday night. Suddenly I'd remember that I hadn't spoken to her in what, two, three weeks?

I would pick up the phone and in a panic, dial her number. But no sooner we said hello, Nan would be bang on the button, regaling to me everything she had heard that I had been up to. Like I said, she was ever watchful. Soon enough the laughter would begin and the world would be put right again.

On an endnote and speaking of laughter, one of the best times I ever had with my Nan involved a car journey across town. It was Christmas and I had the job of collecting her from west London to ferry her over to Mum and Dad's in the east. She was on fine form that day and had a bit of the devil about her. Arseholes who swore too much. Tony Fucking Blair. And all those poxy idiots on Big Brother, all formed part of a very vigorous and very funny conversation, as we trawled through the traffic.

When we got to Essex, I think I was still giggling as I got out the car and went round the other side to open the door for her. Then something really strange happened.

As I took her hand, she clasped mine tightly and beamed up to me from the passenger seat - 'I remember these little hands.'

Now, I do have little hands but as she said that, all those memories came flooding back to me in an instant.

The market trips, the walks around town, the conversations over tables. It was an amazing moment to relive all those snapshots in time and whenever I think upon them, as I have done over the last few months, they do make me feel grateful for my beautiful and dear ol' Nanny Pat.

Although it does also make me feel sad sometimes. Knowing that I will never hold her hand again. 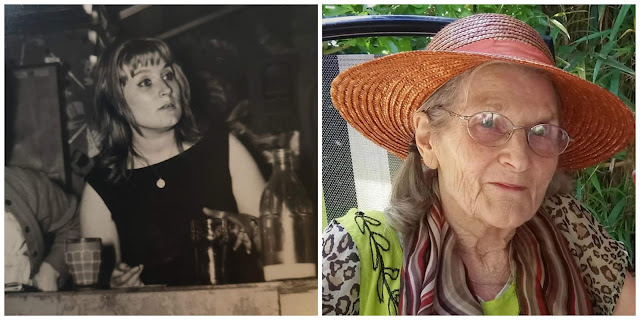 Aaron (@1dish4the4road) said…
What a beautiful reflection of your nan, Danny. So touching, but had me smiling too - she sounds a real character! Very sorry for your loss - it's clear she leaves a lot of fond memories..
9 January 2019 at 19:11

ricketyjo said…
She sounds like quite the woman! I'm sorry for your loss, thank you for sharing your memories. Lots of love. x
28 January 2019 at 20:47