'Where do you get the salt marsh lamb from?' - I hear you say. Whilst thumping a fist down on the table. I know, it is a pressing question and if you really wanted to spend some time, seeking the Holy Grail of lamb, then you would have to wonder from Land's End to John O' Groats, to go find it.

Well, maybe not that far. But you would still have to pop your head up to North Wales (Anglesey),  reach across to Essex (West Mersea) and stretch to dip your little toe into brackish lowlands of Somerset (Bridgewater Bay). This is only going by my own personal experiences by the way. Basically, where there are coastal marshes, you are bound to find someone farming sheep on there. So, as you can imagine, there is a lot of it about in this country. You just have to look.

'What is so good about salt marsh lamb?' - I suppose is really the question. And the answer simply comes from the diet that these sheep receive from grazing in these flatland areas. The grasses and herbs they chomp and nibble on - such as samphire and sea purslane - are wild and bountiful, and full of minerals. As you might expect from the neighbouring sea, they do also absorb a lot of salt, all of which contributes to the texture and flavour of their meat. Such terroir is said to keep the sheep in such good shape, that even when it approaches mutton, you will still find it quite delicate.

Having visited Rye, in the New Year, when we were getting ready to go, the one thing I knew I had to do, was to pop into a butchers on the way home and get some infamous Romney Salt Marsh lamb. As they were dotted all over the place.

A visit to Dungeness the day before very nearly put the blinkers on this decision though. There is nothing quite like a desolate pebbled beach, peppered with rickety wooden huts and a huge nuclear power station looming in the background to put you off your lamb chops. However, I figured that Derek Jarman must have dined on some salt marsh lamb during his tenure there. And if it was good enough for him, it would be good enough for me. Oh and he wasn't a vegetarian or vegan. In case you wondered. I checked.

We actually got our lamb from a farm shop called Salts Farm Shop & Cafe - a great little place, perched out on the edge of Rye. For some reason, I decided to go for some lamb neck fillets, rather than a joint. And I was glad that I did.

Lamb neck is usually associated with low and slow cooking but that is for when the bone is still intact and you want some scrag and fingers to slurp off, after finishing a casserole. When it is cleanly filleted, the option to go fast and furious is much better, both for tenderness and ease of slicing. Carving lamb can be such an arse sometimes.

I didn't want to mess about with the flavour of the meat too much but I still went ahead with a gentle marinade, for an hour or so, to break those fibres down a touch.

The accompanying veg? Well, I pinched an idea from Diana Henry for this one. In 'Simple' she has a cracking recipe, where you layer up baked potatoes, fennel and dress with lemon and then top with lamb loin chops and a parsley-anchovy relish. A great, lip-smacking dish for late spring. But here, for a more seasonal approach, I deciding to layer up slices of leek, shallot, potatoes and a touch of chilli, to roast. The decision to add some slithers of clementine was admittedly, a bit foolhardy. It wasn't bad but it did bring back a Christmas vibe, that was sort of out of place on a grey, January day. Still, the kale I threw in towards the end wasn't a bad shout. Kale crisps are de rigeur, after all. Oh wait, that was in 2017, wasn't it. Damn it.

No matter. As winter warmers go, this all worked out well, as did the gravy; and I would recommend that you go for neck fillet, should you ever see it on the counter. Especially if it Salt Marsh Lamb.

Might be a bit more expensive but it is definitely well worth the stretch. 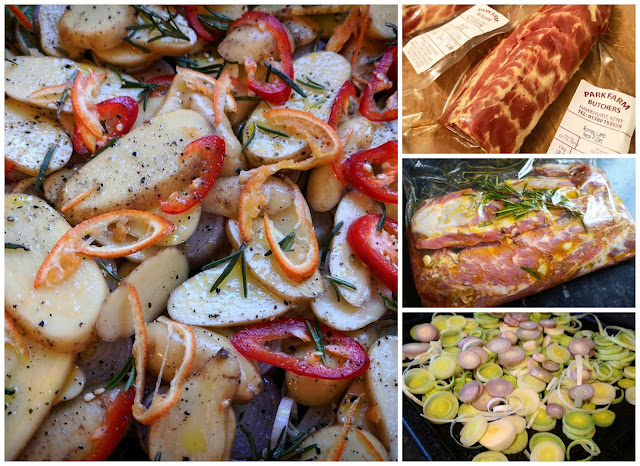 First, take your lamb neck fillets and place them in a sealable bag, along with the oil, lemon juice, herbs and season generously. Seal and leave in the fridge for an hour.

When ready, heat your oven to 180°C (fan assisted) and take the lamb back out, to come up to room temperature.

Next, place the leek and shallot slices onto a large, shallow baking tray and then season with the salt and black pepper. Top with the potatoes, chilli, rosemary and clementine, and then drizzle over the rapeseed oil and vermouth.

Pop into the oven for 15 minutes, then take the tray out and mix the vegetables up - the idea is that for the first 15 minutes the potatoes take the brunt of the heat. Otherwise the leek and shallot catches too quickly.

Roast for another 15 minutes before topping with the chopped kale.

Now place a large frying pan on the hob over a high heat, until it begins to smoke. Take your fillets out and put them in pan to brown and char, turning frequently.

Once done put the pan into the oven or transfer to a tray and roast for another 5-6 minutes.

At this point, you might want to mix your vegetables up a touch more.

When the lamb is done, wrap in foil and leave to rest for 10 minutes.

Check on your vegetables. Once the potatoes are soft and the rest is caramelised it is done.

Place the frying pan back on the hob, over a high heat and deglaze with the red wine, scraping the bottom to collect any bits and pieces. Then pour the lamb stock in.

Whisk in the redcurrant jelly and reduce by two thirds - if you want a touch more sweetness, add a smidgen of honey.

To serve, spoon a good portion of the vegetables into the centre of a place. Slice the rested neck up and place on top. Then finish with some of that lovely gravy around the outside. 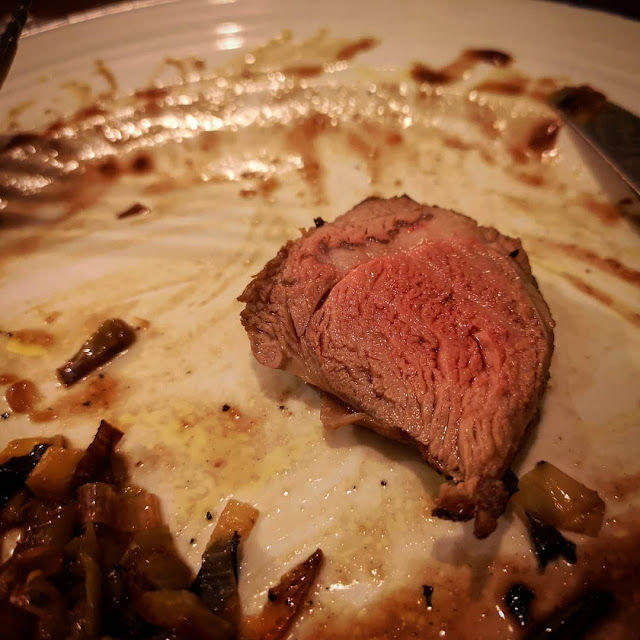