It's the start of the summer holidays. I have just got home. And everyone has buggered off to Lakeside. To get their ears pierced, to ransack H&M and Primark, and then have a jolly good old time up in the food court, on floor three.

Even as I type this, they are probably laughing, whilst chowing down on some Katsu curry flavoured California Rolls from Wasabi. Or a Bacon Cheeseburger from Five Guys, with all the friggin' free toppings - which should bloody well be free tbh.

Or (heaven forbid) a 7 layer burrito from Taco Bell - featuring 7 layers of hell.

And they are laughing because for my dinner tonight, they have a left a singular packet of sauerkraut and mushroom dumplings from a well-known German supermarket (called Lidl) in the fridge. No doubt in a bid to force me to participate in #meatfreemondays for my dinner tonight.

I say that exclusively because written instructions left on the side simply said:

'You can boil or fry the dumplings that are in the fridge, babe. See you later.'

Well, he who laughs last, laughs longest than the longest thing ever, and I have just transformed these dumplings from something that sounded fairly mundane, into something quite spectacular.

Using the power of roasted garlic and salami jam from Tracklements.

Yes, this is a plug and yes, I fairly used up half a jar of this rich, umami-packed condiment, whilst concocting a quick red wine sauce to coat the fried filled pastries. Obviously, given the sour nature of fermented cabbage, a bit of sweetness always does quite nicely to cut through and adding a dollop of this 'jam' did the trick. Think I might try adding it to a stew next. Or maybe with some cheese, as intended.

For the time being, I am now not so furious. Because due to the element of cured meat, I managed to beat the mandate and also come up a very quick meal, that really was quite delicious.

They can have their frivolities and their Millies Cookies.

(That's the amount of salami that get mixed into the jam.) 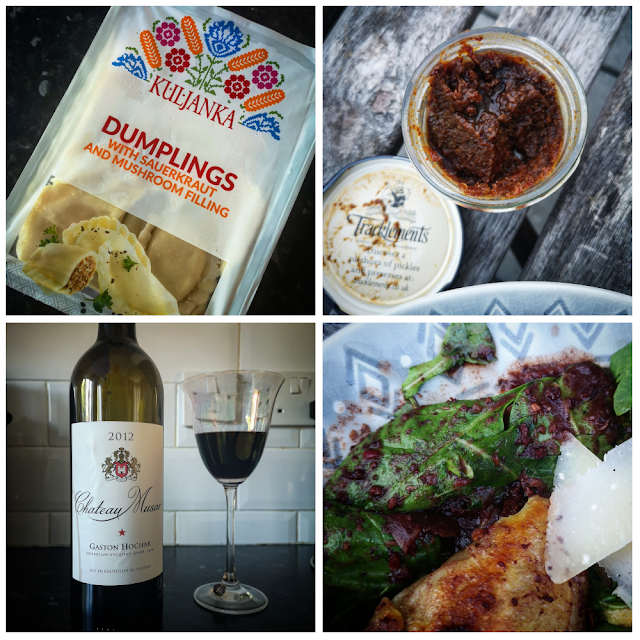 Heat a generous splash of oil in a pan, over a medium heat, and then add the dumplings.

Fry for about 3 minutes on each side, until they begin to crisp and become golden.

Remove the dumplings from the pan and put into a bowl, and then place the pan back on the heat.

Add the red wine and jam to the pan and reduce for 1 minute.

Meanwhile, add some salad leaves to the bowl and mix with the warm dumplings.

Serve the salad onto a plate and dress the red wine and jam reduction by pouring all over.

Finish with shaved Parmesan scattered over the top.